At this moment, it's time to test the ICEMAN HPC-925 Multiplatform CPU Cooler, it's an Aluminum Cooler with Nickel plated tower and heatpipes, we must thank EVERCOOL for send us this CPU Cooler for review. 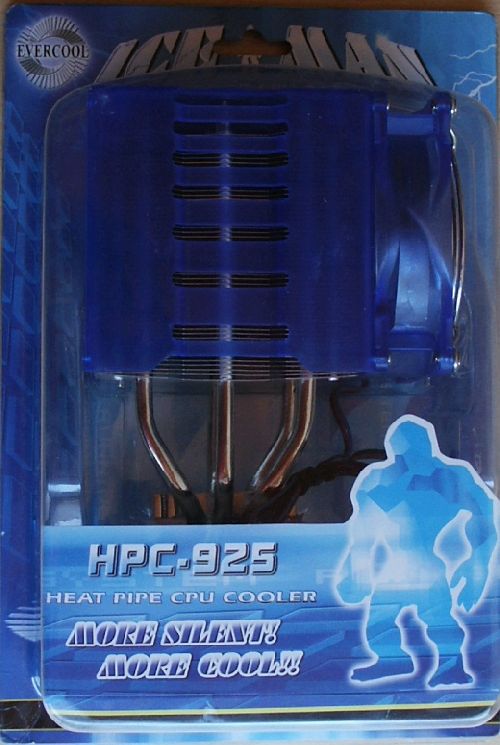 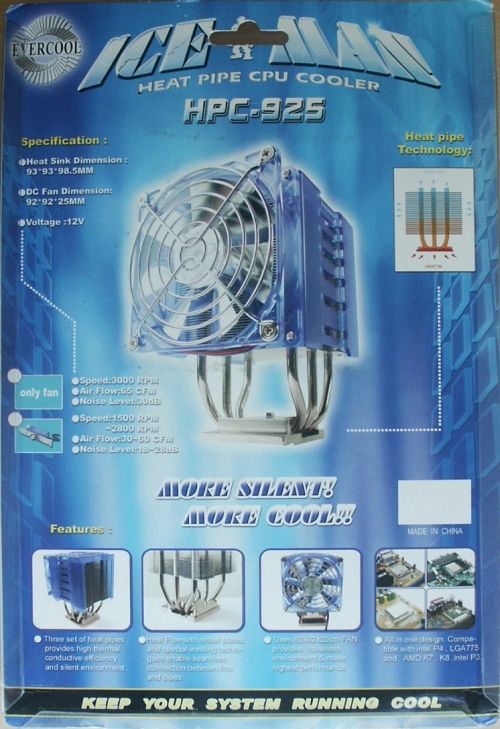 It comes in a pretty regular display in this kind of products, it's a plastic box with the most important features of the products and product brief on it's backside. 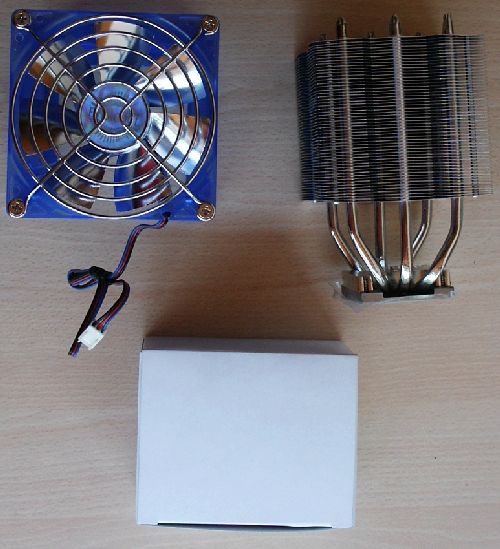 Here's a view of what's included in the display. We can see the aluminum tower, a little white box and a 92mm fan with it's mounting gear. 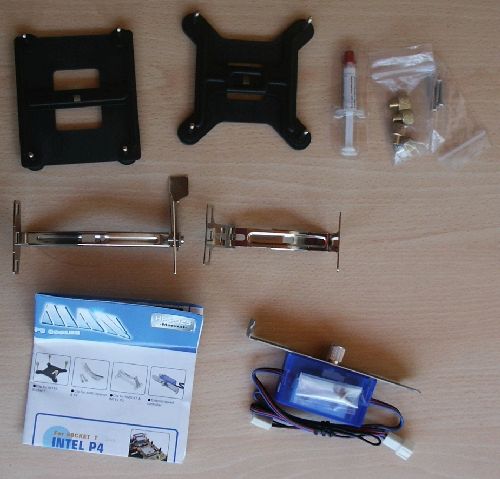 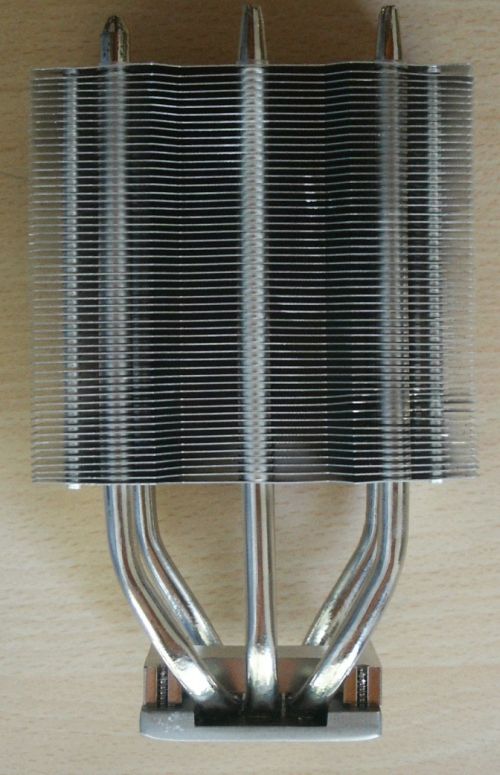 The Aluminum tower is big and heavy, its weight is almost 2 pounds (1KG). We can see the 56 plates and 6 heatpipes. 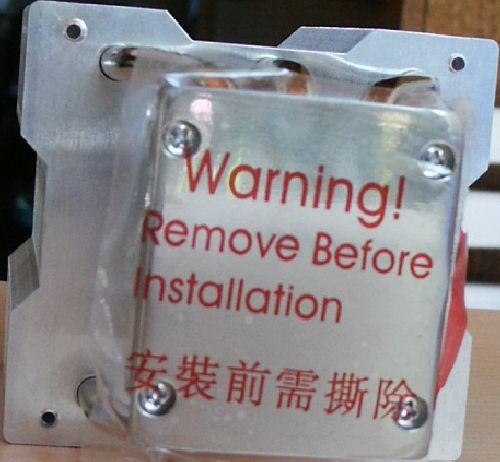 For those who can't read Chinese they even translated it… (Editor note: what a boring joke I will kill myself) 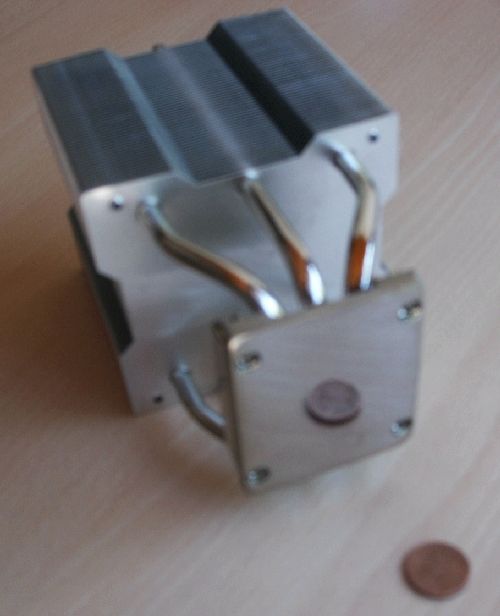 Heatsink's base polished is outstanding, it is almost like a mirror, witch guaranties an excellent contact with the CPU. 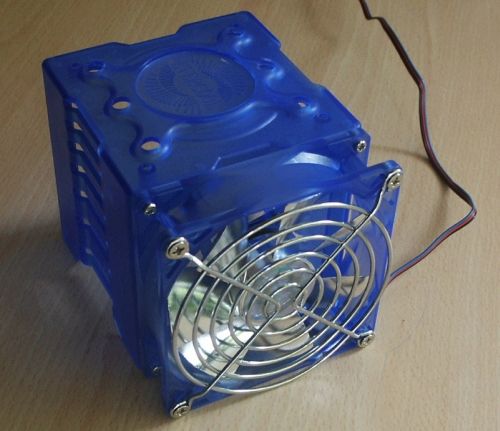 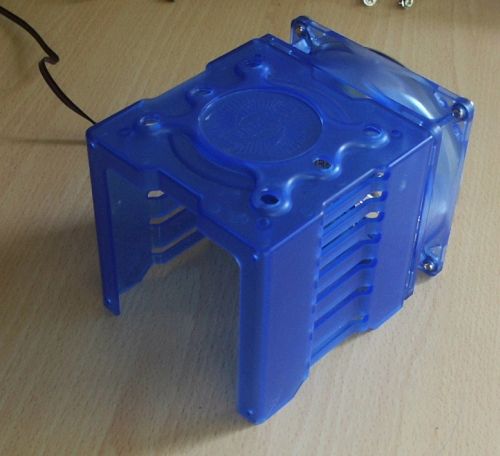 Here the blue 92mm fan with its mounting gear. 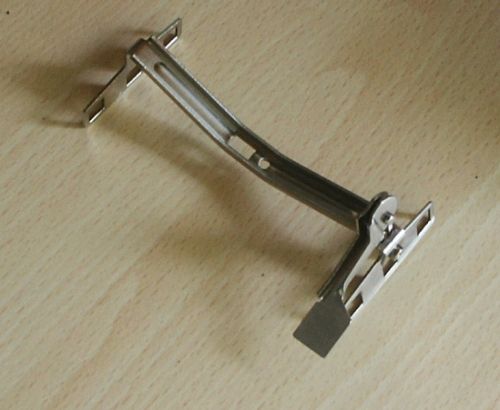 The K8 Mounting clip looks almost like the BOX coolers mounting clip. We noticed this isn't the clip in the instructions (Nothing to complain, considering the other mounting clips were much more difficult to manage). 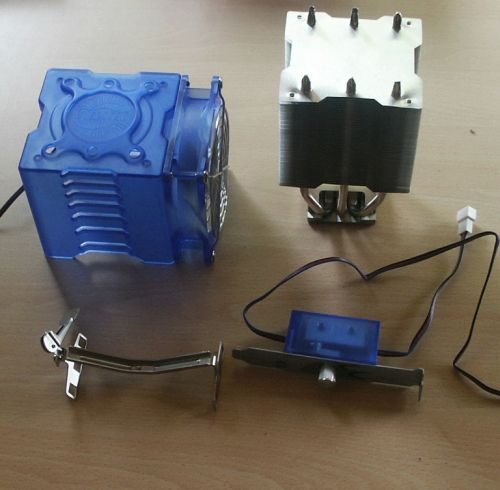 Here is everything needed to mount this cooler on a K8 system. 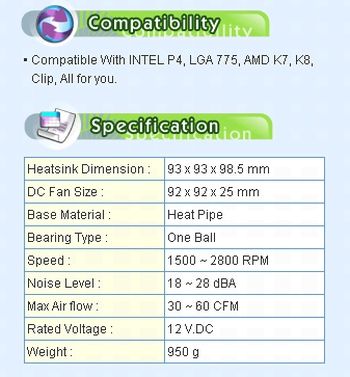 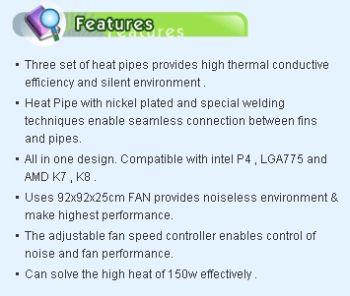 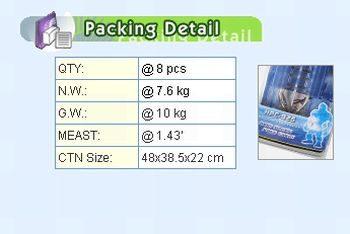 Not much to say about the specs, it has all been said there, now it is time to install the cooler.

The first thing I did, even if you don't believe it, was to read the instructions. We look for the mounting pieces needed for the K8 installation and we notice we are missing the clip and two screws which are displayed in the instructions. But we find another clip that looks just like the ones used in the BOX Coolers of K8 CPU's. 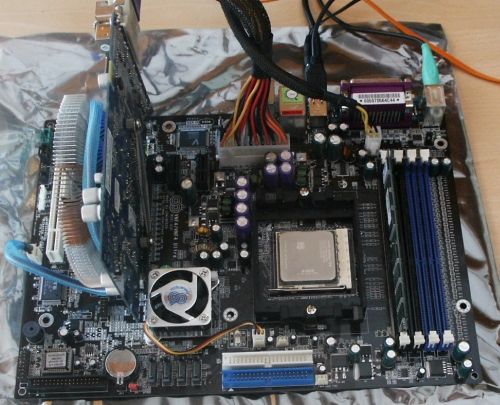 Once the old Cooler is removed we are ready to install the new one. 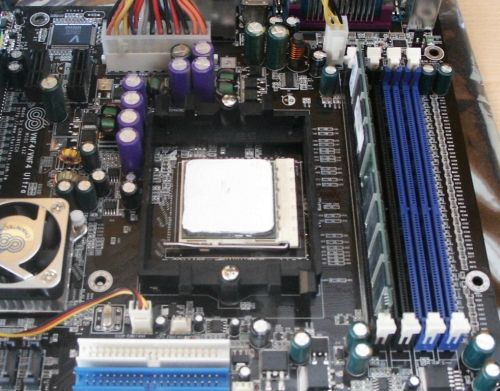 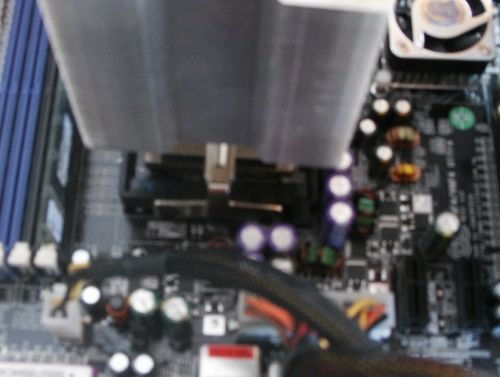 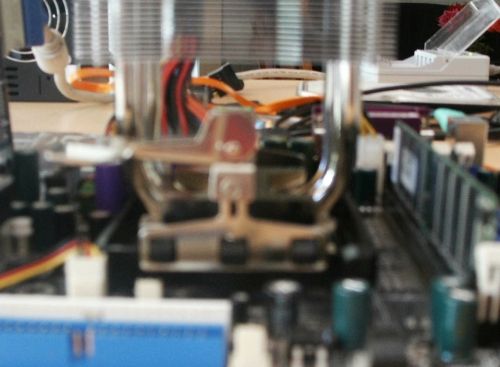 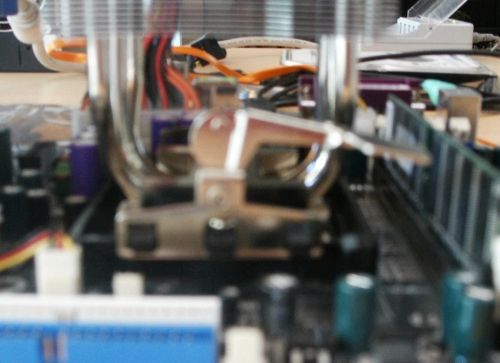 …and securing the mounting clip. 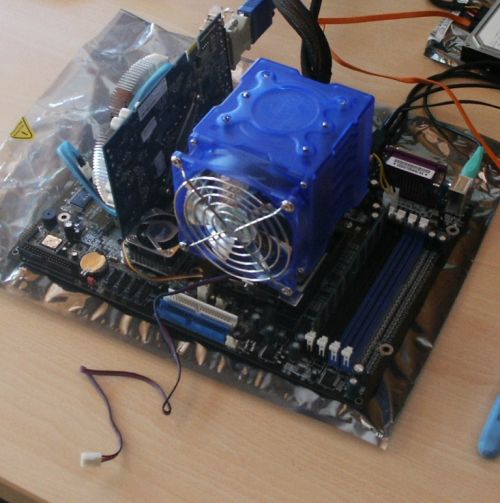 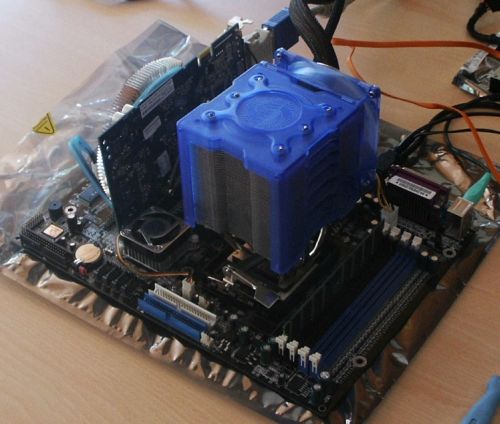 Now it is time to place the fan and the mounting gear on top of the tower. It has two positions, you just have to choose the one which you like. 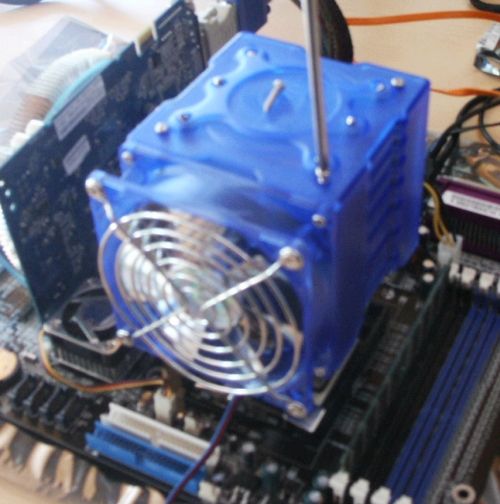 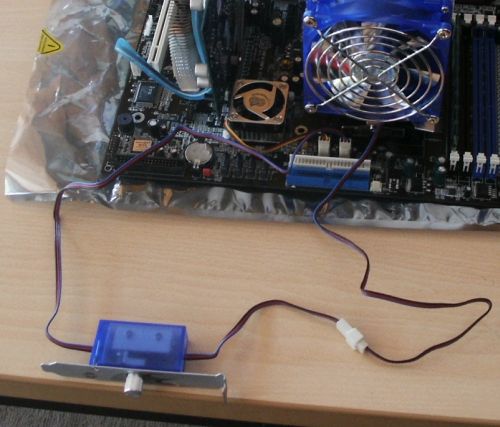 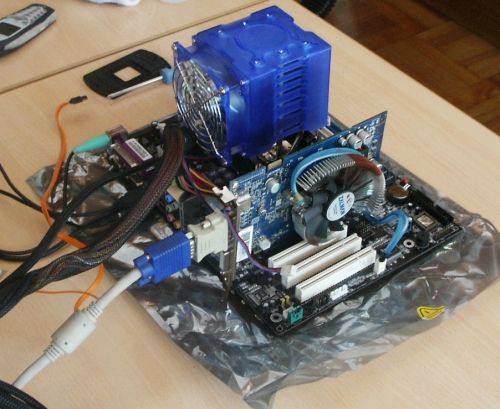 A simple installation, it didn't take more than 5 minutes to mount it and then be ready to test the monster.

The tests were done on the following machine:

To make this review more interesting, 3 coolers were used to compared them in similar conditions with 2 different CPU's at a 23°C environment temperature. The measurements were done at stock speed and with a 50% overclock on a 3000+ Venice (2700Mhz at 1,7Vcore) and 40% overclock with a 3200+ Venice (2800Mhz at 1,7Vcore). We used a Thermaltake TR2-M6 at full speed to emulate a BOX Cooler, and the famous Zalman CNPS7000B-CU LED as the contender, at low and full speed. The measurements were done with Everest Ultimate Edition software. 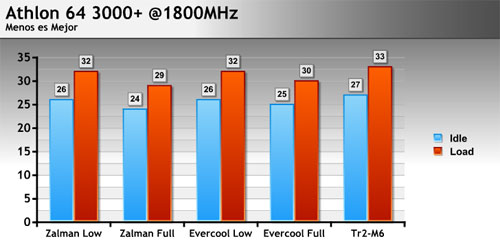 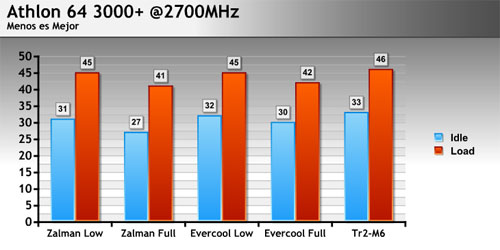 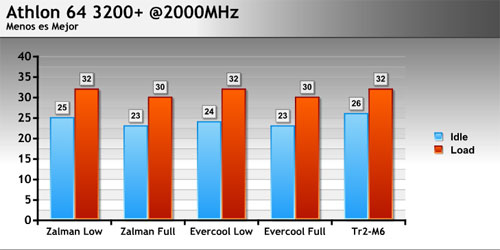 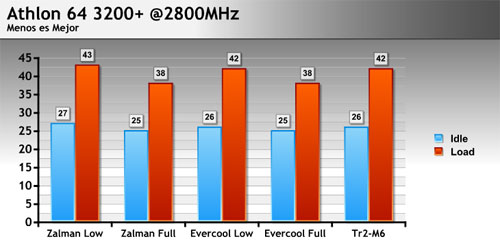 As you can see the EVERCOOL ICE MAN was a fair contender for the famous Zalman 7000 series. It is also to be noticed that both, the Evercool and Zalman used at low speed perform like the TR2-M6 at full speed, which is like a BOX cooler would perform (or sort of it). We was impressed by the results of both high-end coolers, obtaining temperatures near and even the same as the environment temperature, this could be because of the lack of precision of the motherboard sensors.

Now that the review is done, we have to find the pros and cons of the cooler. First of all, we have to recognize the quality of the product, it is really well done. The installation was very fast and easy. The 92mm fan moves a lot of air and it does a little more noise than the Zalman, but you couldn't notice a BIG difference, at least i didn't.

The Bad:
– Very heavy
– Lack of leds to make it more eye-catching
– Outdated instructions
– It could include a 3,5 bay fan speed regulator